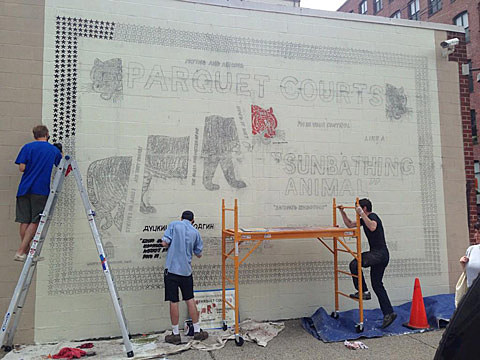 Parquet Courts have had a pretty good year so far, with an acclaimed third album and a full slate of touring. They just played Lollapalooza on Saturday (8/2), Pickathon on Sunday (8/3) and Seattle on Monday (8/4). While the band are taking a breather, they have lined up a holiday show in their hometown, their biggest NYC show to date: Webster Hall on December 11, playing with Blues Control and PC Worship. Tickets for that show go on sale Monday (8/11) at 10 AM.

While in Seattle, Parquets Courts stopped by KEXP for an in-studio session which you can listen to here. Also, next time you're in Williamsburg, look out for the Sunbathing Animal mural that's currently up on N. 10th and Driggs.