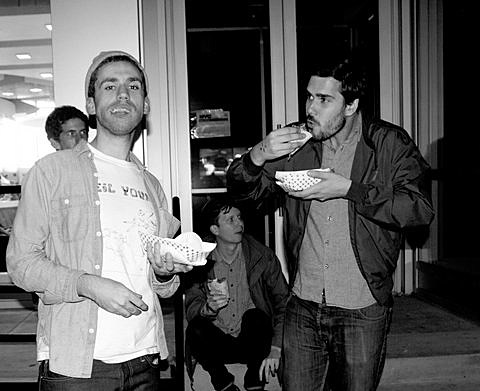 Parquet Courts debut album, Light Up Gold, came out back in July on the band's own Dull Tools label and has remained in near-constant rotation on my stereo ever since. Hooky, witty, bristling with nervous energy and the excitement of moving to the big city (and toughing it out), Light Up Gold doesn't have a bum song amongst its 13 tracks and is a shoo-in for by Best of 2012 list. They are also pretty great live. If you haven't heard the album yet you can download a couple MP3s above and stream the whole thing below.

While Parquet Courts (which features Andrew Savage of Fergus & Geronimo [RIP?]) have focused most of their attention on NYC so far, that will change soon as Light Up Gold is getting a wider release via What's Your Rupture on January 15. The rest of the country will have a chance to see them live too, on a tour that starts a week after their show at Warsaw on December 21 opening for Fucked Up. That tour will wrap up in Brooklyn on January 11 at Death by Audio which will serve as a second record release party for Light Up Gold at the venue (the other was in August).

All Parquet Courts tour dates are below along with the album stream.