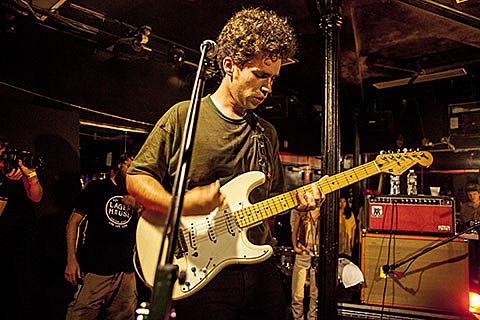 As you may know, Parquet Courts and PC Worship will be on tour together this fall, concluding with a holiday show at NYC's Webster Hall on December 11 with Blues Control (tickets). But those two are doing more than just touring together, they've formed a new band called PCPC who will also play smaller shows along the tour. Andrew Savage explains:

Like P-Funk, MinuteFlag, Ciccone Youth, Loutallica and Red House Chili Painters (bet you didn't know about that one), PCPC is what happens when two legendary rock juggernauts join forces. In this instance, members of PC Worship and Parquet Courts have merged into a NY noise-rock confederacy, each band bringing their own sonic distinctions. Spawning from a long history of playing shows together as separate entities, PCPC is born out of an aesthetic solidarity, and will to create something new. Look for them this Fall in select cities throughout USA and Europe.

PCPC will first bring the noise as opener for Thurston Moore's upcoming Northeast tour, including both the 10/21 Saint Vitus (tickets) and 10/26 Rough Trade (tickets) shows. All Parquet Courts (and Parkay Quarts, which they're being billed as for some reason) and PCPC dates are listed below.

Meanwhile, Parquet Courts have a new video for "Bodies" from this year's Sunbathing Animal. It was shot at their sweaty record release party at Bed Stuy's Sugarhill Supper Club by Iain Forsyth and Jane Pollard who made the new Nick Cave movie, 20,000 Days on Earth. You can check that out below.

PC Worship's new album, Social Rust, is out this week and can be streamed below too.

Dates are listed, along with the new Parquet Courts video, below...

Parquet Courts Bodies Made Of At Sugarhill Supper Club