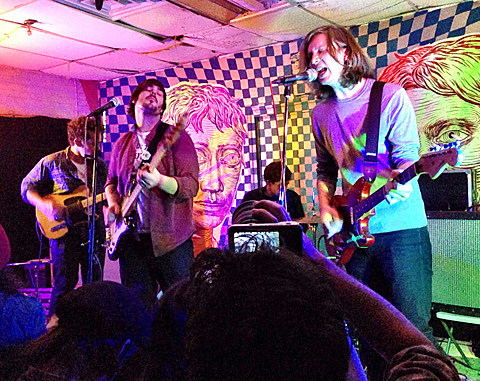 Parquet Courts were the surprise guests at Death by Audio on Monday (11/3), playing with old friends Detroit's Tyvek. "Parquet Courts would not exist without Tyvek, no doubt," said PC's Andrew Savage on stage that night. Their DbA set leaned heavily on Light Up Gold, playing all but a couple songs from the album, plus a few from this year's Sunbathing Animal and the front half of the room was pretty much going mental for the whole show. After the show, co-frontman Austin Brown called it a "classic DbA Parquet Courts set." Setlist is below.

Parquet Courts' second album of the year (but as Parkay Quarts), Content Nausea, is out next week digitally via What's Your Rupture? (CD on 12/2, vinyl early next year) and you can stream the whole thing in this post. Made mostly by Savage and Brown on a four-track, written and recorded and mastered in two weeks, it's a little weirder than what they've done before, but its also got some of their catchiest songs yet -- including "Pretty Machines" which sounds like "Sweet Child O' Mine" if covered by Warm Jets-era Eno. Also: a fairly straight-up cover of "These Boots Are Made for Walking." Listen below.

With bassist Sean Yeaton (who'll be part of NY Rock Lottery) a new father and drummer Max Savage finishing school, Andrew Savage and Austin Brown are touring Europe as Parkay Quarts (as well as some with PC Worship members as PCPC), but the whole band will be back together for their NYC show at Webster Hall on December 11 with PC Worship and Blues Control (tickets). Parquet Courts have also just announce a 2015 North American tour staring in January. No new NYC date for that.

All dates are listed, along with the Parkay Quarts album stream and DbA setlist, below...

Parquet Courts have an Active crowd