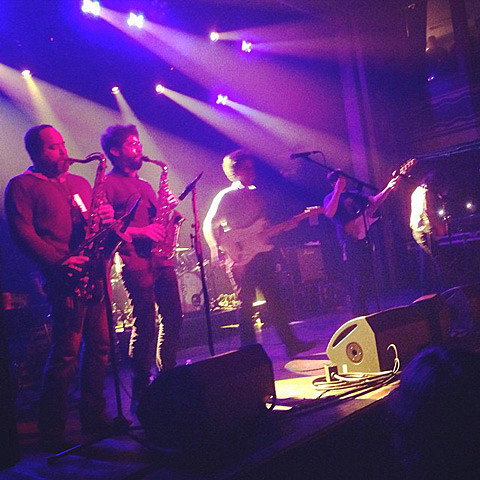 Parquet Courts capped off their busy 2014 last night (12/11) with their biggest headlining hometown show yet, playing a sold-out Webster Hall. The band were in good spirits -- Austin Brown spent the first part of "Uncast Shadow Of A Southern Myth" grappling with a bottle of wine and an opener -- in front of a crowd that sang along much of the time when they weren't moshing around. (Some did both.) In addition to "Uncast..." we got a few songs off the new Content Nausea (released under the name Parkay Quarts), like set opener "Urban Ease," plus "Everyday It Starts," the title track and "Pretty Machines." The latter, which sounds a little like "Sweet Child O' Mine," was augmented by two saxophonists as well as Eaters' Bob Jones on organ. (The other half of Eaters, Jonathan Schenke, was behind the soundboard. I'm not the biggest Webster Hall fan, but they sounded great last night.) We also got pretty much what you'd want to hear off of their other 2014 album, Sunbathing Animal, and Light Up Gold, including its still killer one-two opening punch of "Master of My Craft" and "Borrowed Time." "Stoned and Starving" was the only glaring omission. I had the feeling they would've played longer but a second show was set to start at 11 PM so they called it after a three-song encore. Setlist is below.

Opening the night were more experimental, noisier sets from PC Worship and Blues Control both of whom I thought did really well in a big place like Webster. Blues Control's more new-agey material in particular worked well with the venue's acoustics.

You may recall that PC Worship and Parquet Courts formed a noise band called PCPC that toured with Thurston Moore (who was playing Webster Hall's Marlin Room last night, coincidentally). PCPC will play in NYC tonight (12/12) at Trans Pecos where they'll perform with Greg Fox's Guardian Alien, Excepter, and Rat Piss Aquarium which is "Natalie Weyes Blood harshin." It's being billed as a release party for a PCPC book that they sold on tour:

Released for PCPC's 2014 European tour, this book contains 64 pages of artwork by A. Savage and Justin Frye. This gorgeous book includes 2 risograph mini-posters and one 22 x 34″, two-color silkscreen tour poster. Limited edition, these are expected to sell out fast, don't wait. Perfect gift for that quiet weirdo in the family!

The Trans Pecos show is $8 at the door. Flyer for that, plus Parquet Courts at Webster Hall setlist and videos, below... 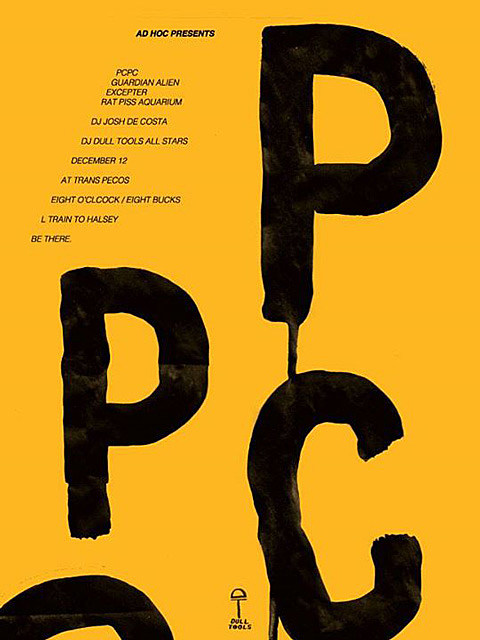