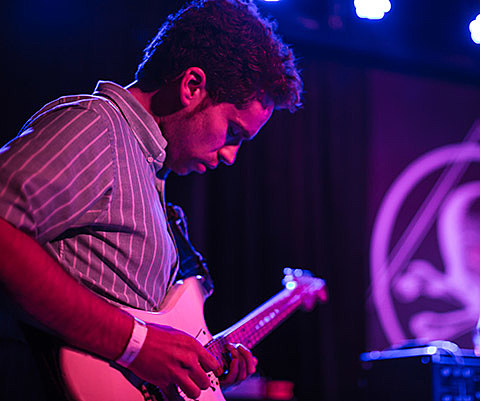 Parquet Courts recently announced a 2015 tour kicking off later this month and running through April, when they play Coachella. That tour didn't have a hometown show announced for the NYC band, who played a sold-out Webster Hall show in December, but they've now squeezed one in happening at a much smaller venue than Webster Hall, Palisades on February 9. Opening are their local Dull Tools pals Future Punx and Eaters. Tickets go on sale at noon on Friday (1/16).

Meanwhile, the band have just released a video for "Pretty Machines" (the one that kinda sounds like "Sweet Child 'O Mine") from last year's Parkay Qwarts album Content Nausea. The video was co-directed by the band's Austin Brown and you can watch it below. You can also catch Brown at the big Planned Parenthood benefit at MHOW on Valentine's Day with Jon Spencer Blues Explosion, Julianna Barwick, Lenny Kaye and more (tickets).

Updated dates are listed, along with the "Pretty Machines" video and video of their recent Letterman performance, below...