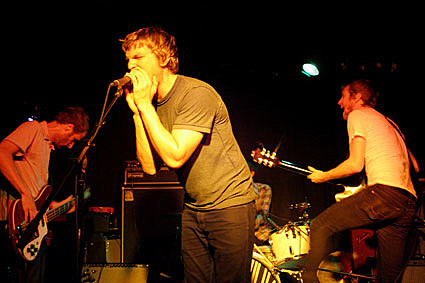 Right before Midlake, Sound Team & Cold War Kids came to NYC to play Mercury-Mercury-Southpaw-Maxwells, they played TT The Bear's in Boston, MA. That's where new BrooklynVegan interviewer Christine caught up with them....

BrooklynVegan Christine: So you guys have played a lot of shows in New York, opening for Two Gallants at bowery, and your shows at Pianos. Because of them, you’ve gotten a lot of attention on blogs and such, have you received a lot of label interest, and if so, will you guys be signing soon?

Cold War Kids Nate: We have had some pretty good label interest. We, I guess, since that time, of that stuff going on, post south by southwest, we’ve got to learn a lot about what it is we want going into it. First meeting with different labels, we had no idea what we were after and we were like, you know, new enough to know we didn’t need to make any rash decisions. We could take our time learning which is kind of weird because there are classic clichés that labels want to rush bands into deals that they don’t know all of the repercussions of. So I think we’ve heard enough of those stories between friends and reading about bands that we like, that we know we need to get everything we want out of a deal and to be with a label that is really respected and to do a lot of research and work and all that stuff. So that stuff is all going to be figured out pretty soon for us, so that’s going to be nice.

* with Mates of State
# with Editors
^ with Dr. Dog
% with Elvis Perkins

The Underrated Blog was at one of the Mercury Lounge shows.