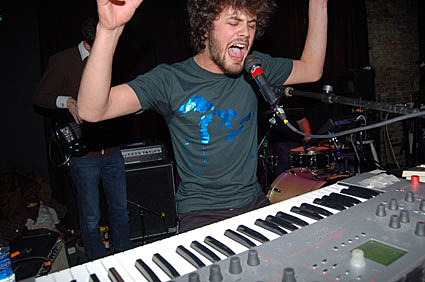 Boston/Cambridge's Passion Pit will play their first-ever NYC show at Pianos tonight (August 13, 2008). Bill-favorite Sky Larkin are also playing their own first NYC show on the same bill. If you miss it don't worry - tonight's show is also part of a 3-date Pianos residency that has Passion Pit back in town on August 20th and 27th (and Sky Larkin are also playing again on Thursday).

There's been a lot of buzz around Passion Pit lately based on the strength of their debut EP which is being re-released with two extra tracks on September 16th by Frenchkiss Records.

The re-release of the band's heralded "Chunk of Change" EP on Sept. 16 will cap off quite a year for the soulful Cambridge electro-pop quartet. What began as an Angelakos solo project to impress his girlfriend on Valentine's Day has since morphed into a full band that's generated almost unparalleled local buzz, ultimately winning Best New Act in the recent 'FNX Radio Best Music Poll. Within a few months, Passion Pit went from the underground dance-party circuit to opening for Death Cab For Cutie at the Bank of America Pavilion.

And now Passion Pit is about to blow up on a national level with the help of Frenchkiss, home of the Hold Steady, Les Savy Fav and Rahim. [Boston Herald]

You can hear one of the tracks from that EP by downloading the MP3 above. It's one of the songs that was added to the re-release. You can also get an instant download of a remix of the same song by pre-ordering the EP at Insound now. All dates below...