photo: Passion Pit at Kings Theatre in May (more by Mimi Hong) 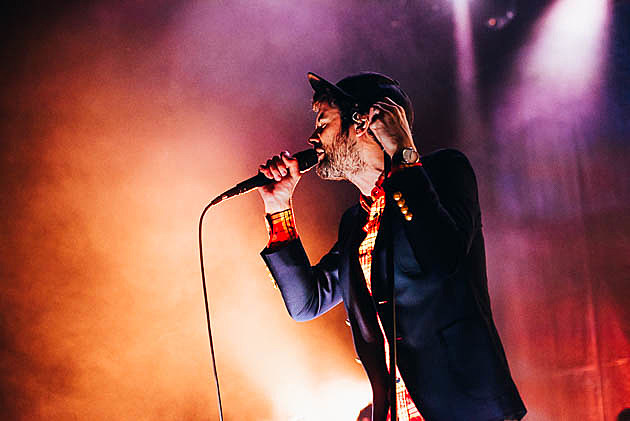 Main Passion Pit member Michael Angelakos appeared on the latest episode of Bret Easton Ellis' podcast. They talk about a lot in their hour-plus conversation, and as SPIN points out, Michael comes out as gay on the podcast. He says coming to terms with his sexuality is part of what led to his recent divorce with his ex-wife Kristy Mucci. He says:

At that time [while making Manners] I had broken up with my girlfriend, who inspired Chunk of Change [...] and that's when it started kicking up a lot of confusion as to what I liked in regards to my sexuality, in regards to even music, I was like "why am I making this electronic music? I wanna do all these other things." Anytime someone tells me that I'm good at one thing, that's when I want to do all the other things I like to do, which is a little bratty but you know. Specifically with my sexuality, it was just -- so unlike with bipolar it was like, "don't go to get help, don't talk to anybody." Because I lived in such a straight group of people -- not that anyone wasn't gonna be understanding -- it was just not the time.

...It was so easy at the time just to talk about girls, so I just kept writing about them. And also there was the narrative of the Chunk of Change EP: "he made it for his girlfriend!"

Michael: That is a very true story. It's kinda funny. I laughed at it 'cause I was like "no one's gonna believe this," and sure enough it was the only thing anyone wrote about it. Still to this day. But I will say that I was going through so many difficult issues with girls in general that when I started dating my wife, she just quieted them so much so. She was such a good friend that it became kind of a non-issue. I was like "okay so I don't have to think about it for now." It's always been about putting it off in my head. Not consciously. I don't know what your experience with it was, but when you're kind of teetering on the edge of heterosexuality or homosexuality or whatever, you don't really know what's going on. It's just so much more comfortable to keep going back to what you know. [...] I just didn't wanna deal with other people.

Brett: But didn't your wife ever question it? Did you guys ever talk about it?

Michael: Yeah from day one she knew I was bisexual. And that's something I've always said to people I'm very close with, and I would drop it in a way where it's like, "Please, can we talk about it?" But obviously everyone was just like "Okay." And probably thought it was bullshit. But at that time I just wanted so badly to be straight. Because I love her so much. I think that was one of the most painful things about when we decided to separate. She said, "I don't want anyone to think that this is your fault because you're gay, it's not your fault." And she was so sweet about it because when I decided to really deal with it, like head on -- which was I don't know in June -- she was the one who kind of spearheaded it in a way but then said, "You have to take it from here." She said, "Whatever happens right now is whatever, but you need to figure out what's going with your sexuality. You can't hate yourself anymore. And you can't be buying all these things that people are saying about you. You have a very rich and interesting life that cannot be condensed into an article."

Listen to the whole podcast below...