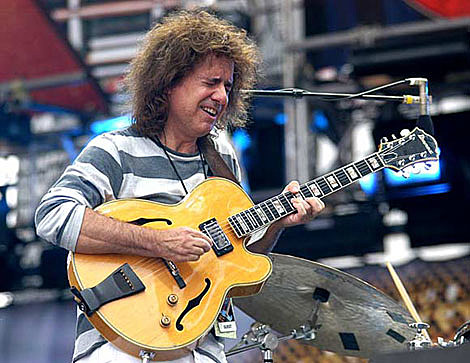 "Orchestrionics" is the term that I am using to describe a new performance method to present music alone onstage using acoustic and acoustoelectric musical instruments that are mechanically controlled using the power of modern technology.

In early 2010 a new recording will be released on Nonesuch. It will be a "solo" record in that I am the only musician--but a CD that in some ways recontextualizes the term.

With his Orchestrion album coming out January 26th, Pat Metheny embarks on nearly four months of touring that kick off this February. The tour's European leg runs February 1st to March 22nd. The tour then picks up in North America on April 6th and closes with two dates at NYC's Town Hall on May 21st and 22nd. Tickets are on fanclub presale now. Tickets go on internet presale Thursday, December 3rd at 10am, and then general sale starts December 5th at noon.

Part of Metheny's album/tour pre-sale includes the chance to get a wooden music box that will "play about 11 seconds of a theme Pat will choose from the new Orchestrion CD."

Pat Metheny: An interview about Listening and Leading