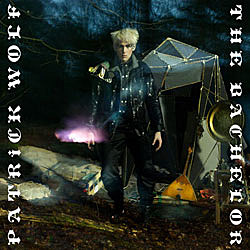 Great news for those Wolf fans over in or nearby NY, now. Patrick will be showcasing his brand new album with a one-off acoustic performance at Le Poisson Rouge in New York on May 6th. This performance will give New Yorkers, or indeed anyone who fancies travelling to Manhattan from out of town, their first chance to see Patrick perform songs from his new album, The Bachelor, which will be released on June 2nd in the US.

At this first US date of 2009, Patrick will perform acoustically, playing stripped down versions of the songs from his new album that ranges across confrontational electronica to heart wrenching ballads. This will be the first time an American audience has the chance to see Patrick perform as he started out, on his own, without a band. He plans to return to the US in the summer with the full six piece outfit.

Patrick said: "I am excited to be going back to America, to play songs from my new album. And to show New York how it all started by going there on my own with only a case full of instruments for company".

As you all know, with to Patrick's new album being funded via Bandstocks, Bandstock holders are entitled to many privileges and rewards. To this end there will be a two day pre-sale for stockholders, with tickets going on general sale on Monday, April 6th.

I guess the first single, "Vulture" (a collaboration with Alec Empire), falls into the... "confrontational electronica" category. You can watch the video, featuring a half-naked, S&M-outfitted Patrick (NSFW), below...

Thanks Eduardo, Joseph, and Peter!