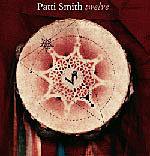 I keep forgetting to post this. Patti Smith is playing three shows in one night at Bowery Ballroom on April 24th. I think two are now sold out, but there are still tickets for the last one (which is good because maybe she'll keep playing and playing, or maybe it's bad because she'll be so tired after playing two shows right before it). They were also selling 3-show passes which are also sold out. All tickets include a copy of her new CD "Twelve" which is all covers.

She'll be performing at Hiro Ballroom on April 18th too - also now sold out.