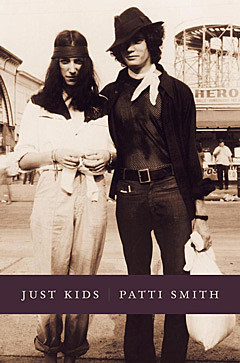 Patti Smith's 2010 memoir, Just Kids, about her early, struggling days in New York with Robert Mapplethorpe, will be the basis of a new series for Showtime, reports The Hollywood Reporter. Smith, who was originally trying to adapt her book into a screenplay, will write the "limited series" with showrunner John Logan (who does the same for Showtime's Penny Dreadful and wrote the screenplay to upcoming James Bond film SPECTRE.) Smith said in a press release:

A limited series on Showtime will allow us to explore the characters more deeply, enabling us to develop stories beyond the book and allow a measure of unorthodox presentation. The medium of a television limited series offers narrative freedom and a chance to expand upon the themes of the book.

Apart from that it's happening, no other details about the series have been released.

In related news, HBO released the first look at Martin Scorsese and Mick Jagger's Vinyl, the series about the highs and lows (and highs) of the music industry in mid-'70s NYC. The series stars Bobby Cannavale as a record label exec and, from the minute-long teaser (set to The New York Dolls' "Personality Crisis"), looks to be in the Goodfellas/Casino mold. Watch that below.

Patti Smith is also going on a book tour for her new book M Train and playing Horses in full this fall.