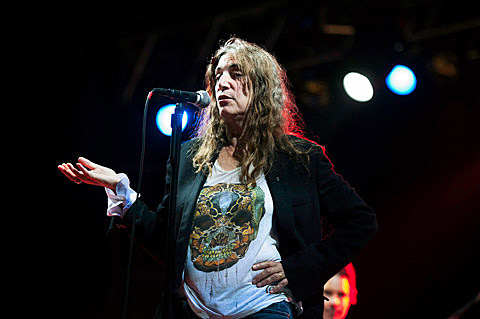 Like she did last year and many years before that, Patti Smith and her band will ring in the new year in her hometown of NYC over the course of three nights at Bowery Ballroom (12/29, 12/30, 12/31). Tickets for all three shows go on sale Friday (11/18) at noon.

Patti is playing solo in NYC even sooner at the Metropolitan Museum of Art on December 2 with Jesse Smith and friends, "saluting Alfred Stieglitz and his circle, focusing on his collaborative relationship with Georgia O'Keeffe. Unfortunately, this show is sold out.

She is also one of the contributors to Q Magazine's tribute to U2's Achtung Baby, which was recently reissued in honor of its 20th anniversary, along with Jack White, Depeche Mode, Nine Inch Nails, and others. You check out the full tracklist and stream her cover of "Until the End of the World", alongside a list of all of her upcoming dates, below.

The full track listing for AHK-toong BAY-bi Covered is as follows:

The album, which will be available with issue Q305, also features exclusive artwork based on the band's original release (pictured).

"It is always Q's intention to present a unique take on music. At a time when free CDs have become ten-a-penny, I strongly believe the AHK-toong BAY-bi Covered album sets a new, and much higher, benchmark for the format," says Q Editor-In-Chief Paul Rees of the album.

"Not only in the sense that each of the tracks are brand new recordings by some of the biggest and most iconic names in music such as Jack White, Nine Inch Nails and Patti Smith, but also in that several of them mark the first new material we have heard from these acts in a long time - such as those by The Killers, Damien Rice and Garbage. This is an entirely appropriate way to mark Q's anniversary and that of Achtung Baby, one of the pivotal albums in our lifetime."