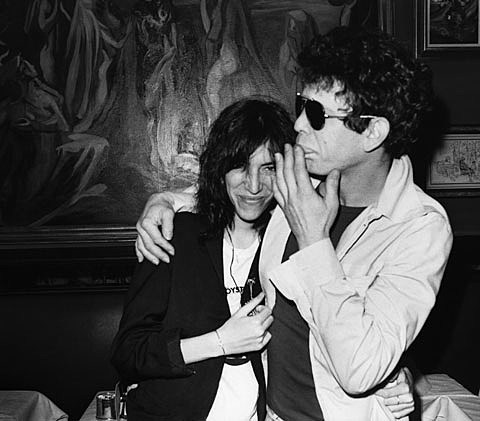 Patti Smith already gave a brief statement to Rolling Stone about the passing of her friend Lou Reed, and now in a piece for The New Yorker, she's written a much longer eulogy. It begins:

On Sunday morning, I rose early. I had decided the night before to go to the ocean, so I slipped a book and a bottle of water into a sack and caught a ride to Rockaway Beach. It felt like a significant date, but I failed to conjure anything specific. The beach was empty, and, with the anniversary of Hurricane Sandy looming, the quiet sea seemed to embody the contradictory truth of nature. I stood there for a while, tracing the path of a low-flying plane, when I received a text message from my daughter, Jesse. Lou Reed was dead. I flinched and took a deep breath. I had seen him with his wife, Laurie, in the city recently, and I'd sensed that he was ill. A weariness shadowed her customary brightness. When Lou said goodbye, his dark eyes seemed to contain an infinite and benevolent sadness.

I met Lou at Max's Kansas City in 1970. The Velvet Underground played two sets a night for several weeks that summer. The critic and scholar Donald Lyons was shocked that I had never seen them, and he escorted me upstairs for the second set of their first night. I loved to dance, and you could dance for hours to the music of the Velvet Underground. A dissonant surf doo-wop drone allowing you to move very fast or very slow. It was my late and revelatory introduction to "Sister Ray."

Lou Reed's will was also recently posted (via DNAinfo), with everything left to his wife Laurie Anderson, his sister Margaret Reed Weiner, and his 93-year old mother Toby Reed:

A onetime staple at Andy Warhol's factory in the 1960s, Reed also bequeathed Anderson all his art, pictures, jewelry, clothing, person effects, automobiles and boats, according to the will. He also passed along his interest in Sister Ray Enterprises, the company that holds the rights to his songs.

Reed, who had no children, also instructed his executor to give $500,000 to his sister, Margaret Reed Weiner, but encouraged his sibling to look out for their mom.

As discussed, Patti Smith has 3-NYC area shows coming up at the end of the year.