(as you know) Patti Smith played the last show at CBGB's Sunday night, October 15th, 2006. I figured there'd be a bunch of special guests -- at least for the encore -- or maybe a secret opener. Nope. There was no opener. She dedicated "Space Monkey" to Michael Stipe, but he wasn't there like he was in 2005. And though Television's Tom Verlaine was a character in many of her on-stage stories -- including one about her recording with him "LAST NIGHT" -- he was nowhere to be found (actually she told us he sent his regards). Television guitarist Richard Lloyd was there though, as was sometimes-Patti Smith bassist Flea of the Red Hot Chili Peppers.

PATTI STARTED THE SHOW WEARING THIS 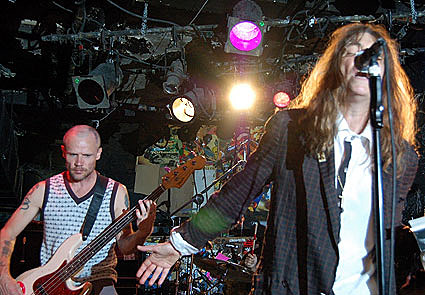 There was a roughly 25-minute painful intermission at this show. I say painful because it just meant more time trapped in place at this extremely crowded, long, bathroom-less show. I say bathroom-less because they closed the downstairs bathrooms - you had to go next door. The show was great - don't get me wrong, but it wasn't exactly comfortable. 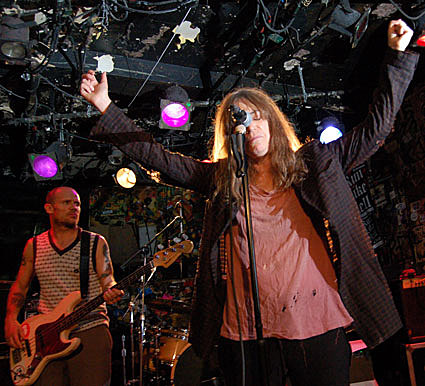 Audience members worth noting: Talking Heads' Chris Franz & Tina Weymouth, Jesse Malin (who helped close out Continental, but not CBGB), Rolling Stone Magazine's David Fricke, Jim Carroll (who Lenny Kaye also played/plays guitar for), Michael Azerrad (This Band Could Be Your Life), CBGB owner Hilly Kristal, Little Steven Van Zandt (who tried to save the place) and The Dictators' Andy Shernoff (who played the night before), and the guy in the picture below... 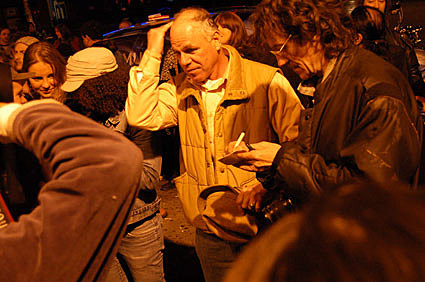 "At the end of a three-and-a-half hour show, on the last night of music at the New York club CBGB, Patti Smith read a list of the fallen, just a few of the musicians and spirits who were so important to the room's legend but couldn't be there for the October 15th wake. They included the Cramps' Bryan Gregory, the critic Lester Bangs, singer Helen Wheels, guitarist Robert Quine, Johnny, Joey and Dee Dee Ramone and Smith's original pianist Richard Sohl. As her band played at soft funeral-march volume behind her, someone in the audience yelled out, "You missed one." Smith smiled. "We remember everything," she said with maternal assurance. Then she pointed out that CBGB was expiring at thirty-three -- the same age as Jesus." [David Fricke in Rolling Stone]