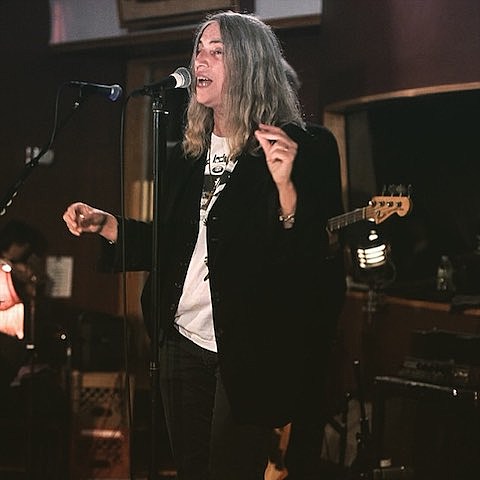 Wednesday, August 27 marked, to the day, the 45 anniversary of NYC's famed Electric Lady Studios which was originally built by Jimi Hendrix. To celebrate, Patti Smith, who was there the day it opened and recorded her classic Horses in the facility's Studio A, gave a private performance of Horses in its entirety to an celeb/industry crowd that included Michael Stipe, Alexander Skarsgard, Liv Tyler, Win Butler, Darren Aronofsky, Alison Mosshart, Dakota Johnson and more.

If you were like us and not there, Patti Smith's Horses performance last night will be released on vinyl and will be the first LP to come out via Electric Lady Records. Release date TBA. (She'll also be performing Horses at Beacon Theatre in November which is sold out.) In the meantime, check out some wire images of the cool folks who were in attendance at Electric Lady Studios last night, below.

That feeling you get when you see one of your favorite artists sing one of your favorite albums in the place she recorded it 40 years ago. Not pictured: Michael Stipe, with whom Patti Smith locked heads during the 'Horses' track "Land." He was a person away from me. #pattismith #lennykaye #freemoney #horses

There was a butt-ton of famous people in this room, but tonight it was just me and Patti Smith (and Michael Stipe)

Patti Smith performed all of Horses for the 45th anniversary of Electric Lady studios. I am now dead.