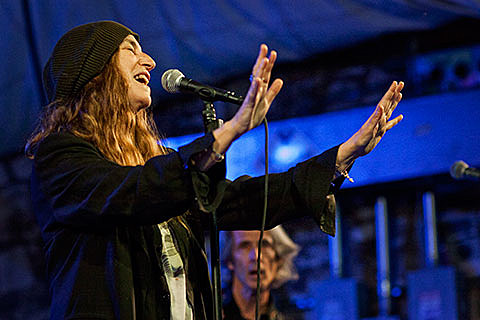 As previously mentioned, the "40th + 2 Anniversary" of Nuggets -- the essential 1972 garage rock compilation put together by Elektra Records founder Jac Holzman and Patti Smith Group guitarist Lenny Kaye -- is being celebrated this year with multiple shows at NYC's City Winery. Most have passed, but the next (and last, for now at least) happens August 31. The lineup has been expanded since we last spoke, and it's pretty exciting. In addition to Lenny Kaye and his Patti Smith Group bandmate Tony Shanahan, Patti Smith herself will be appearing, as well as Joan As Police Woman, Jesse Malin and more. Tickets for the show are still available.

Patti has other live appearances coming up too, including Riot Fest Chicago. In NYC, Patti and her daughter Jesse will take part in a Nico-themed performance at FIAF Florence Gould Hall on October 2, which is part of the Crossing the Line Festival. Here's the details:

Killer Road is a sound exploration of the tragic death of Nico, Velvet Underground vocalist and 60s icon, while riding her bike on the island of Ibiza in the summer of 1988. A hypnotic meditation on the idea of perpetual motion and the cycle of life and death, the live performance features Patti Smith lending her unique voice to the last poems written by the artist. Soundwalk Collective uses a travel log of field recordings and samples of Nico's signature instrument, the harmonium, to create a magnetic soundscape.

Tickets for that at are on sale now. All Patti Smith dates are listed below.

In other news, Patti reviewed Japanese author Haruki Murakami's new novel Colorless Tsukuru Tazaki and His Years of Pilgrimage for the NY Times. Here's an excerpt:

I had a vague premonition this book would be rooted in common human experience, less up my alley than the alien textures woven throughout "The Wind-Up Bird Chronicle." Yet I also sensed strange notes forming, coiling within a small wound that would not heal. Whichever aspect of himself Murakami drew from in order to create "Colorless Tsukuru Tazaki and His Years of Pilgrimage," it lies somewhere among the stones of his mystical labors.

Joan as Police Woman has European dates coming up after the 'Nuggets' show. Those are listed, with the video for this year's "Holy City" single and the list of Patti's dates, below...