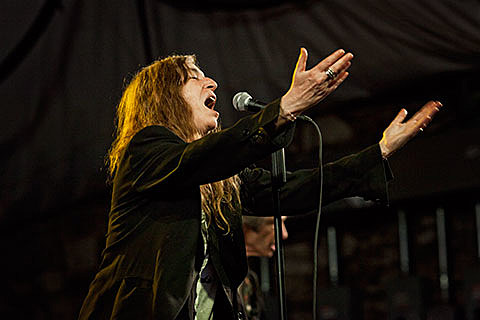 Patti Smith has multiple European dates coming up this year, but in the midst of that, she'll make an appearance in her hometown of NYC for "an evening of music, poetry, sound and remembrance" on April 23 at The Green Space. The event description reads:

April is the cruelest month, breeding / Lilacs out of the dead land, mixing / Memory and desire, stirring.

These lines from T.S. Eliot's poem The Wasteland reflect our mission for the evening, as we honor the chaos and transformation of spring with Jesse Paris Smith, Eric Hoegemeyer and Patti Smith.

Melding music and poetry, they will perform their own compositions, the work of others such as Emily Dickinson, Walt Whitman, W.G. Sebald, Hildegard von Bingen, and salute friends and companions who have passed on in their own transformation. This event is hosted by Spinning On Air's David Garland.

Tickets for the show, which also includes Patti's daughter Jesse and Eric Hoegemeyer are on sale now. If you can't make it, you can watch online as it streams live on www.thegreenespace.org/.

All Patti Smith dates are listed below...