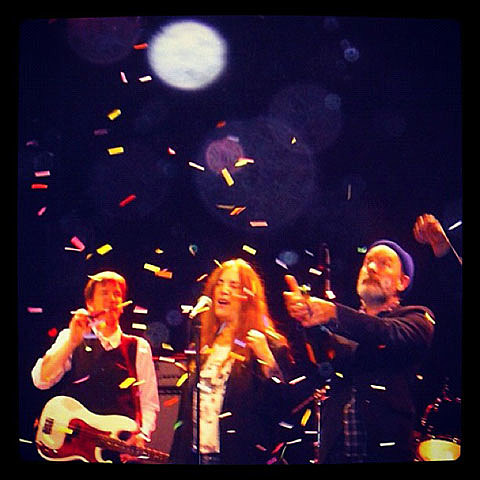 Michael Stipe joined his friend Patti Smith at Bowery Ballroom on New Year's Eve for what was also the end of her final year at the venue...

For 14 years, the three-pack of shows by Patti Smith and Her Band in the final week of December has proved to be a reliably exhilarating way to usher out the old and ring in the new. If it's not the Allmans at the Beacon Theater, it's in the same area code. It's cozy: the smallish Ballroom accommodates fewer than 600. It's egalitarian: tickets are general admission, mostly standing room and reasonably priced. And it's personal: the shows always include one on Dec. 30, to celebrate Ms. Smith's birthday (she turned 65 on Friday).

After the last show -- an excellent night, with many special touches, including Michael Stipe singing "Wichita Lineman" -- Lenny Kaye, Ms. Smith's lead guitarist and general rock subversive, confirmed that the band would still perform, but at some other location. "It's just time to move on," he said. [NY Times]

Catch Patti this February with Philip Glass at the Tune-In Music Festival at the Park Avenue Armory. Stay tuned for info on where Patti will spend her birthday this year.

Check out video of Patti & Michael at Bowery below...

Patti Smith and Her Band NYE