"Playboy & Program Signed by Patton Oswalt" (that's what it says) 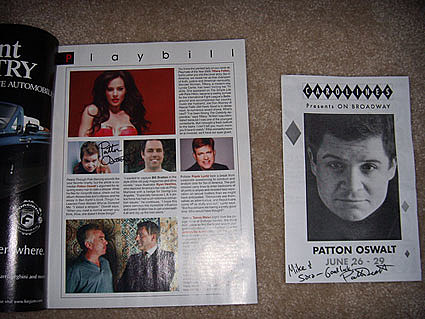 If any of you have been wondering when the Comedians of Comedy will hit NYC again, I have the answer. NEVER! It was announced today (well, late last night) that Zach, Patton, Maria, and Brian (and special guests) will do their last show as a team on July 26th at the beautiful Spreckels Theater in San Diego CA. Tickets are on sale now. CoC shows were, for me, the funnest experiences of my comedy-going life. The core group is simply amazing and the friends they'd bring to the stage at each show was always awe inspiring. Obviously, the gang will probably make stops to NYC as individuals at some point in the future, but I sure am going to miss the sheer magnitude of what CoC delivered to fans across the country at each and every show. The entire farewell letter is below.

Also, I caught All Tomorrow's Parties Comedy Curator Patton Oswalt's 8:30pm show at Caroline's this past Saturday (Juen 28, 2008) and he, with the help of openers John Mulaney and Julian McCullough absolutely tore the roof off the place. Patton kicked the extremely diverse crowd's ass with huge pile of new material. It was so great. I wonder if it's only a matter of time before he has a solo show at a place like Town Hall. He should. 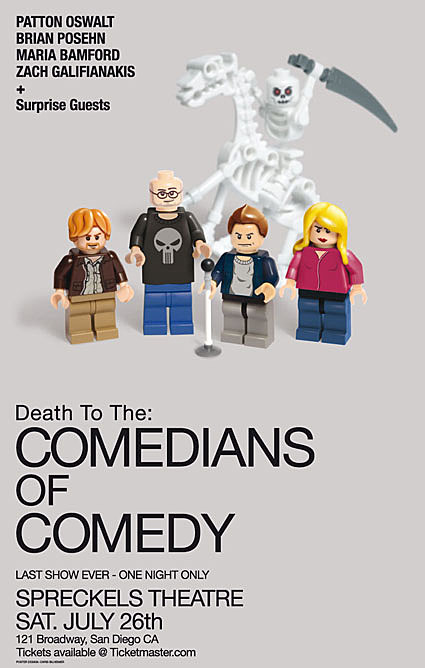 IT'S BETTER TO BURN AWAY

In twenty-four days, we're doing the last ever Comedians of Comedy show.

It's been a fun, four-year run. A feature film, two concert movies, a TV show, a set at Coachella -- not bad.

Things have greater value when they have an ending. And the whole reason for doing the tour in the first place was to give all of us wider exposure. And it worked. Zach and Maria are blowing up and busy. And Brian and I can barely keep our Stork 'n' Stumpy's Plum Fritters on the shelf. It's unfair, now that all of us have benefited from the tour, to herd everyone back into a cramped van three or four times a year. The scheduling hassles are becoming un-workable. And we don't ever want this to become a chore.

So we're doing our farewell show Saturday, July 26th. That's twenty four days from when this is being written. We're doing in in San Diego, at the Spreckels Theatre, where we figure the most number of our fans will be gathered within the same zip code. And there's going to be some monumental special guests on the show.

We've been touched and inspired by all the support, and especially the hassle so many of you have gone through to travel and see us. Since there were so many cities we DIDN'T get to visit, this is chance to see the biggest number of people who've MySpaced us through the years.

And who knows? There might be sporadic get-togethers in the coming years. Patton's curating the comedy at this year's All Tomorrow's Parties in upstate New York. And Coachella eventually wants us back. But those'll be special occasions.

And none of us, individually, will ever stop touring. And you can bet each of us will have openers, young comedians we like and want to give more exposure to. So think of this as the Comedians of Comedy tour splitting into four pieces, still wandering the countryside, just not as cramped when driving.

Plus, there's probably four as-yet-unknown young comedians out there, figuring out a way to do their own tour. This kind of stuff never ends. Who wants to discover everything cool all at once? It'll keep coming. Stay alert.