The weekly comedy canon will be back soon, but in the meantime this quick update from Klaus.... 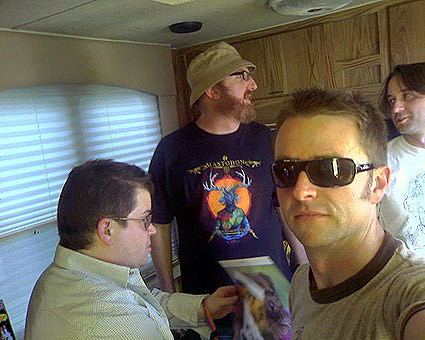 Joining the ranks of David Cross and Eugene Mirman as awesome comedians who've signed to awesome indie rock label Sub Pop, it has been announced that Patton Oswalt's next record (CD/DVD) will be released by Sub Pop on July 10, 2007. There will be a limited edition vinyl version on Stand UP! Records as well. This will be Patton's third-ish full-length live record in a sea of Patton-related full-lengths and EPs.

Patton's previous releases are, for me, the gold standard of how awesome a comedy album can be. His library has an unusually high relistenability factor, so I have high hopes for this one too. Listen to a track at 'A Whole Lotta Nothing'.

Read the most incredible Patton Oswalt interview, ever. Period.

Patton and the other Comedians of Comedy were at Coachella this year. There are tons of reviews out there, but why not read Patton's personal analysis of the show (you'll need to scroll down a bit). Pics from Coachella can be found HERE and HERE