Benjamin Curtis plays on... (via @benjamincurtis) 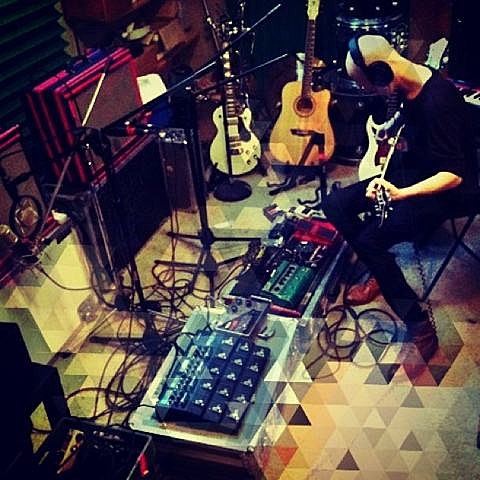 As you guys know, Benjamin has been going through numerous chemo and radiation treatments since January. I'm so happy to say that they have found a bone marrow match for him, and he will be going into the hospital to begin the the transplant process in mid August. Thank you beautiful friends for all of your awesome messages and support. We appreciate it more than we could ever express in one lifetime. I hope to see you on the 22nd. So much love and gratitude, Alley

As you may know, School of Seven Bells' Benjamin Curtis was diagnosed with T-Cell Lymphoblastic Lymphoma earlier this year. The good news is, as mentioned above, they've found a bone marrow match. Many of his friends have come to his aid for a benefit show at The Bowery Terrace at the Bowery Hotel on August 22. Interpol's Paul Banks and the Strokes' Albert Hammond Jr. will perform live, and there will be DJ sets from DJ MomJeans (aka actor Danny Masterson), Alexa Chung, and Fabrizio Moretti with Devendra Banhart. Tickets come at three different levels: $40 general admission; $60 general admission + a vinyl copy of the SVIIB Put Your Sad Down EP (pressed specially for this benefit); and $100 that comes with vinyl and a limited-edition t-shirt.

During the event, there will be a silent auction with items donated by The Black Keys, The Strokes, Yeah Yeah Yeah's, Regina Spektor, Vampire Weekend, The Hives, David Cross, Aziz Ansari, Adam Green, Black Rebel Motorcycle Club, Polyphonic Spree, Zachary Quinto, Saturday Night Live, The Late Show with David Letterman, Late Night with Jimmy Fallon and more. 100% of the money raised will go directly to Benjamin's fund (which you can donate to directly).

Flyer for the benefit show below... 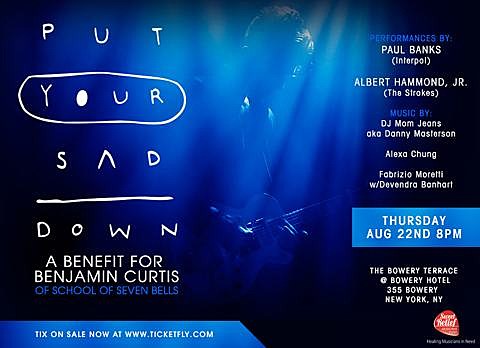