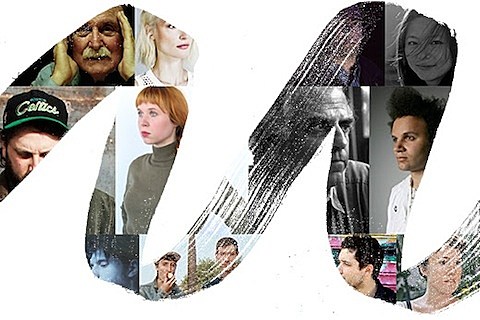 New Amsterdam Records is presenting an all-day event at MoMA PS1 on October 19 called Sound/Source, an "exploration of electroacoustic music in all its forms, featuring collaborations between legends, luminaries, and newcomers as they examine the interplay between human and machine sounds." The centerpiece of the event is electronic composer Paul Lansky's series of Idle Chatter granular synth compositions on the 30th anniversary of the series' birth, including a new live vocal arrangement performed by members of Roomful of Teeth as well as an eight-channel surround sound arrangement performed by Lansky himself. (Lansky's "Mild und Leise" was famously sampled by Radiohead on "Idioteque.") Additionally, Holly Herndon will offer her own interpretation of "Idle Chatter."

Also that day: a performance of Alvin Lucier's "I am sitting in a room" making use of the resonant frequencies in MoMA PS1's geodesic dome. Former Battles vocalist Tyondiai Braxton will also do a set, and pianist Vicky Chow will perform Tristan Perich's album-length piece, Surface Image, a collaboration which will be released next month via New Amsterdam (watch a trailer for the LP below).

Additionally, there will be a number of site-specific sound installations, from Nate Boyce & Daniel Lopatin (Oneohtrix Point Never) in the Boiler Room basement; Daniel Wohl with Olga Bell (Dirty Projectors) and Caroline Shaw in the rooftop Richard Serra room; and literal elevator music created by Lucky Dragons. There will also be a handcrafted instillation of electronic instruments from MOOG.

Tickets for Sound/Source are on sale now. Trailer for Surface Image below...