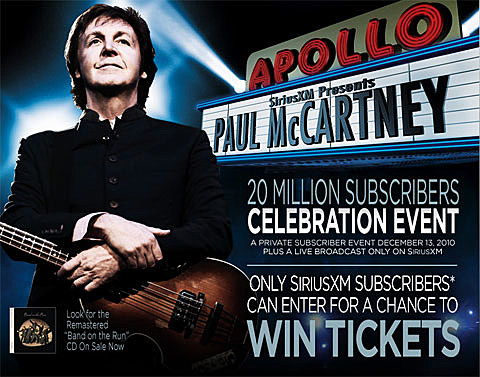 "On December 13 at 8:00 pm ET, history will be made. For the first time in his legendary career, Paul McCartney will perform at Harlem's world famous Apollo Theater, at an exclusive live concert event for SiriusXM listeners. This very special, invitation-only concert will celebrate SiriusXM reaching 20 million subscribers, a milestone the company expects to achieve shortly. As a thank you to its loyal subscribers, SiriusXM will broadcast the concert LIVE nationwide, as well as offer a few lucky subscribers the opportunity to attend this historic event in person." [SiriusXM]

Meanwhile, as you probably heard. "The Beatles dominated the iTunes chart on their first day of digital sales, with Hey Jude proving the most popular download." A press release they sent out about that on Tuesday can be read below...

All 13 Legendary Beatles Studio Albums & Special Digital Box Set
· Apple Corps, EMI and Apple are proud to announce that The Beatles are now available for the first time on the iTunes Store http://www.itunes.com

· Starting today, each of the Beatles' 13 legendary remastered studio albums, including "Sgt. Pepper's Lonely Hearts Club Band," "Revolver," "The Beatles [The White Album]," and "Abbey Road", will be available as iTunes LPs, which create an immersive album experience with a beautiful design and expanded visual features including a unique mini-documentary about the creation of each album.

· The two-volume "Past Masters" compilation and the classic "Red" and "Blue" collections are also available as iTunes LPs.

· A special digital "Beatles Stereo Box Set" contains the 13 remastered studio albums as iTunes LPs with all mini-documentaries, "Past Masters," and the "Live at the Washington Coliseum, 1964" concert film, a worldwide iTunes exclusive which captures the Beatles' very first US concert in its entirety.

· Individual songs from all the albums & box set are also available to purchase.

· In addition, Beatles fans can stream and view the "Live at the Washington Coliseum, 1964" concert film from iTunes for free until December 31 2010.