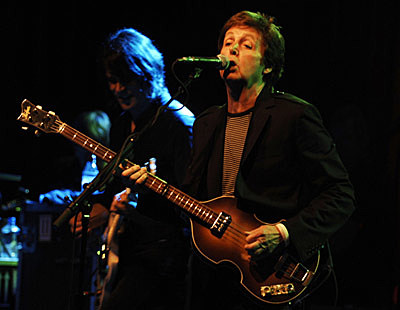 Paul McCartney stormed the stage of a small ballroom on Wednesday and delivered a 20-song set featuring Beatles favorites and select cuts from his newly released album "Memory Almost Full."

The free show for about 700 fans at the Highline Ballroom in New York's Chelsea district was hastily arranged, with McCartney's website only announcing the gig on Tuesday. Passes were distributed through a give-away on the website and to fans who lined up on Wednesday outside the venue.

The former Beatle and Rock and Roll Hall of Famer played a dozen songs from the Beatles catalogue that included opening number "Drive My Car" and Fab Four warhorses "Hey Jude," "Lady Madonna," "Let It Be" and "Get Back." The remaining songs came from the new album and other McCartney solo projects. [Reuters]

"Whoopi Goldberg and Elijah Wood were hanging out up in the balcony. Whoopi was standing and singing along for the entire show while Elijah sat for the bulk of it and we only caught him singing along to 'Lady Madonna'." [Sean Henri]

I wasn't there. I was actually over at Franz Ferdinand.