"I can hear Paul McCartney rehearsing in the concert hall of my school in the hallway. #toodope #franksinatraschoolofthefarts" - @PrincessStoopz 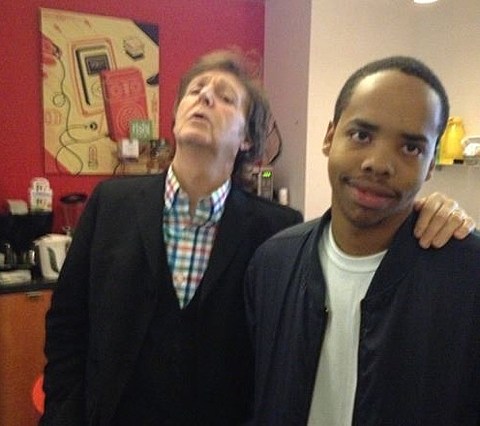 Sir Paul McCartney is about to release his new album, New, next week (10/15) and he's been in NYC this week promoting it. On Monday (10/7) he performed on Late Night with Jimmy Fallon, playing two songs from the new album, the Beatles' "Lady Madonna." He also switched accents with Fallon and told him that he invented the selfie. Videos of all that below.

There was also a listening party at NYC's VW/Audi dealership on 11th Ave, and he hung out with Odd Future's Earl Sweatshrit at the NPR offices (pictured above). And, nothing to do with being in NYC, but also in support of the album he gave his first-ever live Twitter Q&A.

Macca's last NYC show was his two-night stand at Barclays Center in June, but he wouldn't come back without doing another show right? Certain clues have led us to believe that he may be playing one at Frank Sinatra School of the Arts in Queens today (10/9), and within the hour. NYC radio DJ Rich Russo tweeted last night that he'd be seeing McCartney on John Lennon's birthday (which is today), and he just tweeted again, "Can hear Macca's soundcheck echoing down the street as exit the subway.. Wow!" Other tweets (that you can see above) also seem to confirm that Paul is in fact currently soundchecking at Frank Sinatra School of the Arts.

Paul McCartney - "Save Us" on Fallon