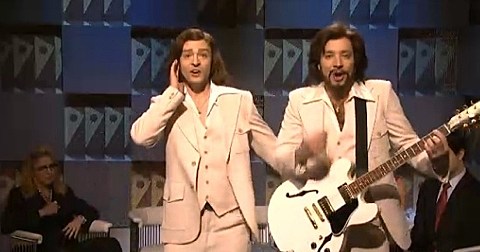 Justin Timberlake and Jimmy Fallon returned to SNL last night (12/21) with Fallon hosting and JT as the musical guest, and of course both starring in a number of the skits as well. They brought back their Brothers Gibb skit, and were joined by Madonna playing herself, and the actual Barry Gibb (the only surviving original member of the Bee Gees) came in to sing with them at the end of the skit. Paul McCartney also showed up to sing "Have Yourself a Merry Little Christmas" with Fallon, and Kanye West and Kim Kardashian were parodied again in a "Waking up with Kimye" sketch. You can watch videos of all those, along with one of Justin performing "Only When I Walk Away," below.

It was also announced on last night's show that Drake will host and be the musical guest on the January 18 episode. Drake recently landed on a couple more year-end lists, may have dissed Kendrick Lamar, and appeared on the new Beyonce album.

Jimmy Fallon & Paul McCartney - "Have Yourself a Merry Little Christmas"

"Waking Up with Kimye"

Justin Timberlake - "Only When I Walk Away"