Paul McCartney at Barclays Center in 2013 (more by Greg Cristman) 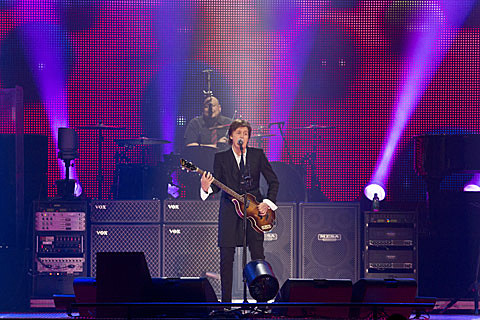 We already knew that Daft Punk would be performing at the 56th Grammy Awards ceremony and that they're bringing Stevie Wonder, Pharrell and Nile Rodgers with them, and now the Grammy performances have gotten even more exciting.

SPIN reports that the closest thing we can get to a Beatles reunion will happen when Paul McCartney and Ringo Starr perform together at the ceremony. This could be even better than Sirvana.

Another exciting announcement that came a few days ago is that the Antarctic metal band Metallica (who have been promising new stuff) will perform too. Maybe they'll play some Beatllica?

And in other Beatles news, there had been talk, via Huffington Post, of Paul and Ringo reuniting at the Ed Sullivan Theater for a 'Late Show with David Letterman' episode to celebrate the 50th anniversary of the first night the Beatles performed there, but a 'Late Show' rep said the show has no plans for a reunion at the moment, though confirmed that the show will recognize the anniversary.