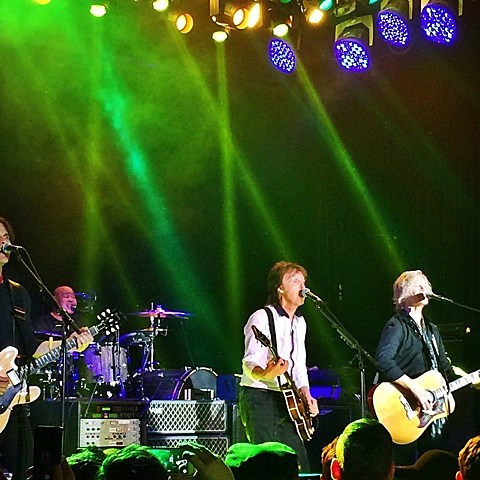 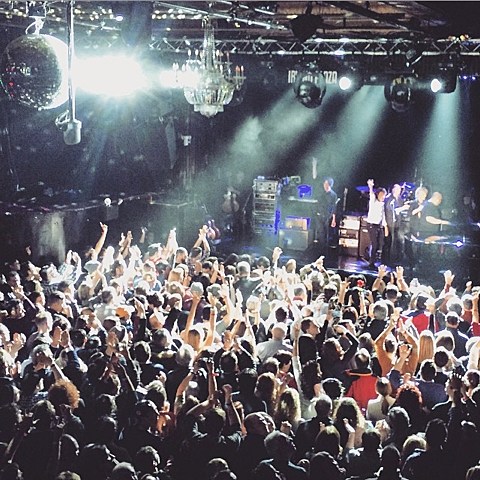 Paul McCartney celebrated Valentine's Day in style, coming to NYC for an extremely intimate show at Irving Plaza, a 1000-capacity venue -- compared to his two nights in 2013 at the 18,000-capacity Barclays Center and his two nights in 2011 at the 50,000-capacity Yankee Stadium. A few hundred tickets were sold that morning, but needless to say it was nearly impossible to get into, and even ticketholders were waiting on a huge line down the block (it moved fast though). The show coincided with Paul's appearance at SNL's 40th anniversary tonight, and tons of famous faces were watching from the VIP balcony, including Meryl Streep, Fred Armisen, Steve Buscemi, Jim Carrey, David Spade, Steve Van Zandt, Chris Rock and more. It's a big weekend for surprise shows in NYC in general, also thanks to NBA All-Star Weekend and Fashion Week resulting in the previous night's private Drake / Nas show at the same venue, the Prince show on Wall Street that night, and the Kanye West show at Flatiron Pedestrian Plaza on Thursday.

Because of the occasion, the show was a little different than other Paul McCartney shows. He and his band took the stage at the late hour of 11 PM, and played a 26-song, one-encore set that ended just over an hour and a half later (as opposed to his 38-song, two-encore set at his recent Barclays Center show). They spent a good portion of the night playing acoustic guitar-led songs, and they seemed to be choosing the setlist based mostly on love-themed material (for example, we didn't get "A Day In The Life," "Live and Let Die," "Helter Skelter," "Eleanor Rigby" and other huge live staples). But you don't leave a Paul McCartney show at a venue that size and get picky about the setlist. When he did play the heavy hitters, the whole place lit up like only few concerts ever can. Not many live music experiences rival a tightly-packed awestruck crowd of 1,000 people singing "Eight Days a Week," "All My Loving," "I've Just Seen A Face," "We Can Work It Out," "And I Love Her," "Lady Madonna," "Drive My Car," "Ob-La-Di, Ob-La-Da," "Back in the U.S.S.R.," "Let it Be" and "Hey Jude" right back at the guy who wrote them.

The one spectacle of the night happened during "My Valentine," which Paul dedicated to his wife Nancy who was in the audience, when red confetti poured out over the crowd. Other than that, we just got to see Paul and his fantastic band for exactly what they are: a fantastic band. No videos playing behind them of The Beatles in their early days, no fancy lights, no rainbow-colored piano pushed to center stage. Just a few guys playing some of the best rock and roll songs ever written without a misstep in sight. Every four-part harmony, every guitar solo, and every minor embellishment was played exactly the way you remember it. It really doesn't need to be said, but in case there was any doubt, popular music's most ageless frontman and his band are flawless.

A few more pictures, videos, and the setlist from the show, below...

Just had to post this... Meryl and Me. This is just one of a the dozens back here.! #MerylStreep 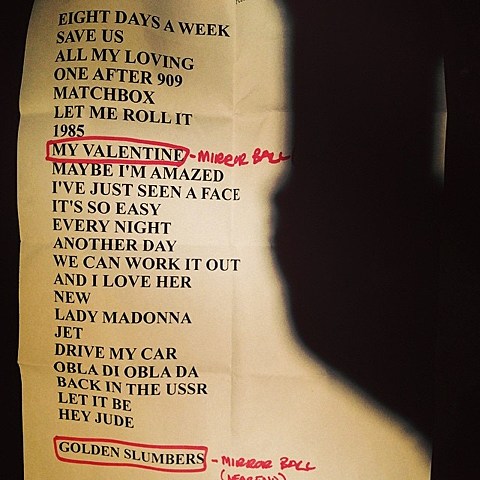