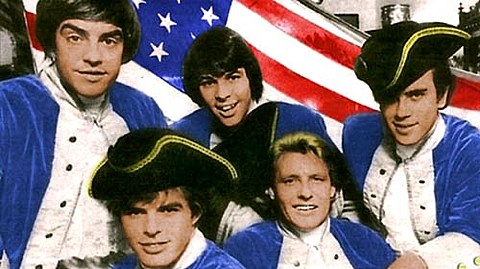 Paul Revere, leader of '60s-era garage rock band Paul Revere & the Raiders, whose classic material was an influence on early punk and later on the garage rock revival, has passed away at 76. Rolling Stone reports:

Paul Revere, organist and ringleader of the long-running rock band the Raiders, passed away October 4th at his home in Idaho, the band's official website revealed. Revere was 76. No cause of death was revealed, but TMZ reports that Revere (born Paul Revere Dick) battled with cancer over the past year. Thanks to his colorful clothing and infectious stage persona, Revere earned a reputation as "the madman of rock & roll." He and his Raiders scored a handful of hits throughout their five decades together, including their anti-drug smash "Kicks."

Known for their Revolutionary War-style attire - like something the real Paul Revere or the Sgt. Pepper's Lonely Hearts Club Band would wear - and their memorable organ riffs, Paul Revere and the Raiders got their start in 1963 with a cover of Richard Berry's "Louie, Louie," which they recorded the same year as the Kingsmen, who had much more success with the single. However, Revere and his Raiders scored four Top Ten singles in the Sixties with "Kicks," "Hungry," "Good Thing" and "Him or Me, What's It Gonna Be." Their biggest triumph came in 1971 with "Indian Reservation (The Lament of the Cherokee Reservation Indian)." A cover of a John D. Loudermilk-penned track, the Raiders' rendition became an unlikely smash, hitting Number One on the Billboard chart in July 1971 and selling over a million copies.

Rest in peace Paul. Your legendary music will live on.

Watch a video of them playing "Kicks" below...