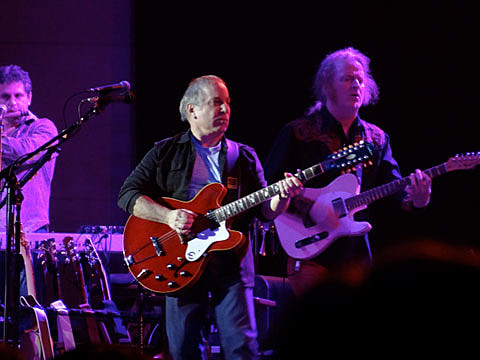 "...Mr. Simon, 69, has a preexisting relationship with vintage gospel music, as he hinted elsewhere in the show. (A double-time rave-up coda in "Kodachrome," released in 1973, plunged straight into "Gone at Last," from 1975.) By now gospel commingles easily with sounds adopted from Africa and Brazil--and New Orleans, and Memphis, while we're at it--in his pursuit of ecstasy through rhythm. This was a show about that pursuit, and it was marvelous: brisk and unsinkable, smartly balanced, deftly paced.

"It's always slightly unnerving and exhilarating to play in your exact neighborhood," Mr. Simon, an Upper West Sider, said playfully, a few songs in. He last played the Beacon as recently as two years ago, when he had the honor of breaking it in after a deluxe refurbishment. There was less of a sense of occasion this time around, which worked to everyone's favor...." [NY Times]

Paul Simon plays Beacon Theater again tonight (5/11) before continuing on his tour that makes stops at the 9:30 Club, the Borgata, Foxwoods and many other places. Last night's setlist, and a video from the May 7th Toronto show where Paul invited a fan on stage to play "Duncan" with him, below...

Paul Simon Concert at Beacon Theatre, New York, NY, USA
Setlist on May 10, 2011
Crazy Love, Vol. II
Dazzling Blue
50 Ways to Leave Your Lover
So Beautiful or So What
Slip Slidin' Away
Vietnam (Jimmy Cliff cover)
Mother and Child Reunion
That Was Your Mother
Hearts and Bones
Mystery Train/Wheels
Rewrite
Peace Like a River
The Obvious Child
The Only Living Boy in New York (Simon & Garfunkel song)
Love Is Eternal Sacred Light
Father and Daughter
Diamonds on the Soles of Her Shoes
Gumboots

Encore:
The Sound of Silence (Simon & Garfunkel song)
Kodachrome
Gone At Last
Here Comes the Sun (The Beatles cover)
The Boy in the Bubble

Encore 2:
Still Crazy After All These Years
Late in the Evening
--