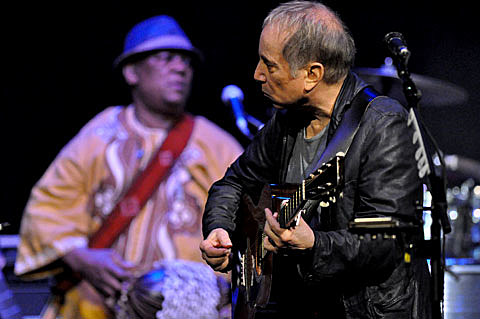 Songwriting legend Paul Simon was recently paid tribute to at Carnegie Hall and not long before that played 2 MSG shows w/ Sting. We didn't make it to the actual Carnegie Hall event, but we have pictures from the rehearsal the night before with Bob Mould, John Doe, Josh Ritter and more. The Wall Street Journal was at Carngie Hall though and writes:

After a slow start, perhaps attributable to a string of songs from Simon's early, more somber days, the concert found its footing in a stretch kicked off by Bob Forrest of Thelonious Monster and Gibby Haynes of Butthole Surfers with, of all things, a Ramones-like reading of "Motorcycle," a song Simon wrote in 1962 for Tico and the Triumphs. ("We be the troubled waters under the bridge," Haynes joked.) Isobel Campbell and Vetiver's Andy Cabic's cheery reading of "Born at the Right Time," and "Think Too Much" by TV on the Radio's Tunde Adebimpe and Antibalas's Amayo tapped into Simon's compositional joy, and Brent Dennen's tender "Something So Right" and Dan Wilson's wonderful "Only Living Boy in New York" exposed his thoughtful side.

More at the WSJ and at Rolling Stone. Paul also has a few more events coming up this year, including two in NYC, and one not far from here.

First, he'll be back at Carnegie Hall on April 17 performing as part of the 25th Anniversary of the Rainforest Fund Benefit Concert. This one includes his pal Sting too, plus James Taylor, Stephen Stills, Dionne Warwick, Kevin Spacey, Patti Scialfa (E Street Band), Chris Botti, Renée Fleming and more. Tickets ($150 - $600) are on sale now.

And it's a bit upstate from NYC, but on August 2 Paul plays the Cooperstown Concert in celebration of The National Baseball Hall of Fame & Museum's 75th Anniversary. Also at that show will be former Yankee Bernie Williams (who is also a jazz guitarist) and others. Tickets are on sale and more info is here for what could be a good weekend away if you're into Paul Simon and you or someone you know is a baseball fan.

Watch a video of Paul playing "Sound of Silence" from his BV-presented Webster Hall show in 2011, below...