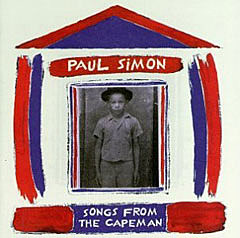 ""The Capeman," Paul Simon's ill-fated foray into the Broadway musical, was so spectacular and costly a flop that when it closed in 1998 after only 68 performances, it was hard to imagine it could ever have an afterlife. But time passes, memories fade, and tastes change, and so for three nights beginning Saturday, the Public Theater will be presenting a new, streamlined version of the show outdoors at the Delacorte Theater in Central Park." [NY Times]

More about the play and how to get tickets, below...

A Concert Version Of THE CAPEMAN

Three Performances Only!
At The Delacorte Theater
August 14-16, 2010

THE CAPEMAN, featuring music by Paul Simon and book and lyrics by Paul Simon and Derek Walcott, will be directed by Tony Award nominee Diane Paulus, who directed the concert version of HAIR at the Delacorte in 2007. Sergio Trujillo will provide choreography and the Grammy-winning Oscar Hernandez and an extraordinary 12-piece orchestra will play Simon's haunting score. Casting and full creative team to be announced at a later date.

Originally on Broadway in 1998, Simon's musical THE CAPEMAN tells the true story of a Nuyorican street gang member whose story exploded on to the front pages of the tabloids in 1959, ultimately revealing the cultural and racial tensions beneath the surface of New York in that era. THE CAPEMAN's score is a dazzling blend of Latin music, Doo Wop and artful ballads to tell a gripping and controversial New York story.

"I think the Delacorte is the ideal place to hear the music from The Capeman," said Paul Simon. "It's going to be a great musical night."

Free tickets will be distributed the day of the show in person at the Delacorte Theater in Central Park beginning at 1 p.m. or by registering for Virtual Ticketing online at ShakespeareInThePark.org the day of the performance you want to attend. Virtual Ticketing recipients are chosen at random to receive tickets, not in the order requests are received.

Reserved Concert Seats can now be reserved for a tax-deductible donation of $175 per seat. These seats are available only at The Public Theater box office or by calling (212) 967-7555.

Priority Concert Seating, for a tax deductible donation of $250 or $500, is available through The Public Theater Development Office at partners@publictheater.org.This e-mail address is being protected from spam bots, you need JavaScript enabled to view it The $500 Priority Seats for the final performance on Monday night, August 16 includes admission to a post-show cast party. Priority Concert Seating availability is limited to ensure that that highest number of free seats are available for the general public on the day of the show.