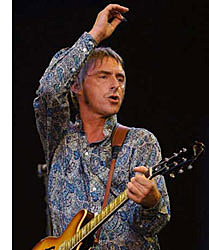 The four-disc "Hit Parade" is due January 23 via indie label Yep Roc; Weller will then play January 29-31 at New York's Irving Plaza, with the shows divided thematically.

Although each show will include music from his entire career, the first night will focus on the music of the Jam, while the second will feature the music of the Style Council. The third gig will cherry-pick from throughout Weller's discography. Tickets go on sale Friday; the thematic concept will not be repeated at any additional concerts." [Reuters]

The presale ("HitParade") starts today at 10am.