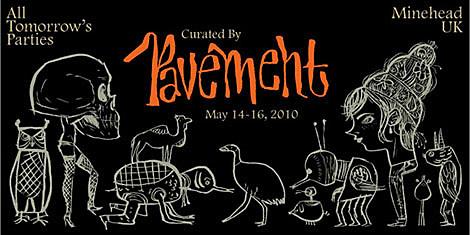 It would be fair to say, we at ATP get to present some very special bands. But we are beyond excited to announce that legendary US band Pavement will headline and curate the weekend of May 14th-16th in 2010!

After years of speculation, arguably the most important American band of the Nineties is returning to the stage with the line-up of Mark Ibold, Scott "Spiral Stairs" Kannberg, Stephen Malkmus, Bob Nastanovich and Steve West reuniting for dates around the world in 2010 including curating and performing at ATP Weekend 2 on May 14th - 16th.

That's a full four months before Pavement play four shows in a row at Central Park Summerstage in NYC. And to quote Hiro (who sent me this, thx!), "so Coachella looks pretty good for them!"