"Saw Pavement frontrow/center in the rain/thunder/lightening, got a setlist, made it 2 BK in time for YYYs at Secret Project Robot. Oh my god" - Jenn Pelly

"Ready to relive tonight's Pavement concert in the pouring rain. Can you make that happen? Kind of night that keeps me in love with my NYC." - Jenna Schnuer 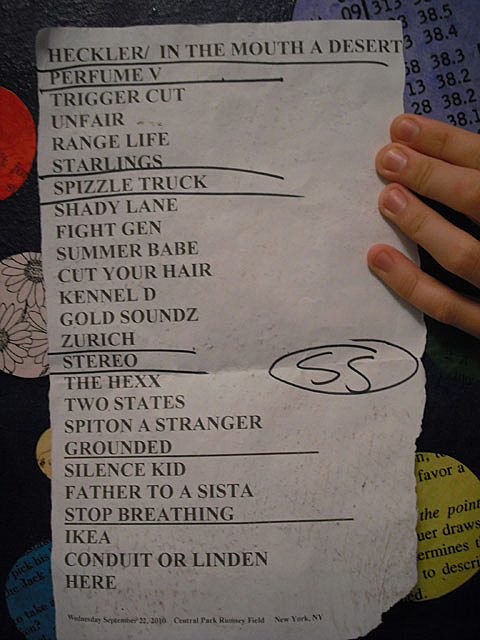 Those who braved the weather Wednesday night ended up getting a still-great Pavement show, but a slightly shorter and much wetter one than the one the night before at the same Central Park venue. Lightning caused an unplanned intermission, but the show did go on after the break, even though the rain didn't stop.

Keith, who sent in the setlist (thanks!), reports that despite the break, "I'm pretty sure they played everything on the list. During the end of the show they played Linden, then Here, then Conduit to close out the show." More, including a full set of pics, coming later HERE.

Times New Viking opened what was the third of five Pavement reunion shows happening in NYC. Thee Oh Sees opened the night before. The first NYC show was Sunday night at Williamsburg Waterfront with Jenny and Johnny and Endless Boogie. Endless Boogie open again tonight (9/23). The final NYC show is Friday with The Beets.

Check out a 15 minute Big Ass Lens video from the first show, below...