'Please be advised this tour is not a prelude to additional jaunts and/or a permanent reunion.' 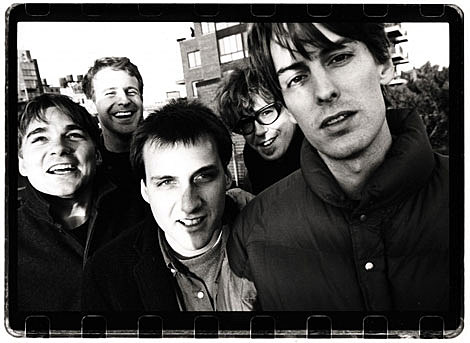 After years of speculation, the most important American band of the Nineties is returning to the stage with the lineup of Mark Ibold, Scott "Spiral Stairs" Kannberg, Stephen Malkmus, Bob Nastanovich and Steve West reuniting for dates around the world in 2010. Please be advised this tour is not a prelude to additional jaunts and/or a permanent reunion.

Described in their own Wikipedia entry as having experienced "moderate commercial success," Pavement's catalog for the Matador, Domino, Drag City and Treble Kicker imprints has come to define in the eyes of many the blueprint for independent rock over the past generation. An evidentiary compilation release is planned to coincide with the touring sometime in 2010.

The first show announced is a New York performance on September 21, 2010 at Rumsey Playfield in Central Park. A pre-sale begins at 10:00 AM EDT on Friday, September 18, 2009 (tomorrow). The password for the pre-sale is ZOWEE and the ticketing link is here. The general on-sale is slated for 10:00 AM EDT on Friday, September 25, 2009. Please note that tickets will be available without surcharges from the Nokia Theatre box office in Times Square and from Earwax at 218 Bedford Avenue in Williamsburg.

Please visit www.crookedrain.com for details on this on-sale as well as all Pavement news as it develops

Note that the above press release says "dates around the world in 2010" and "tour".