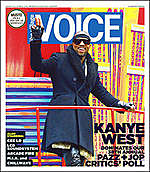 "Yes, he sleeps on fur pillows, searches for marble conference tables on eBay, and has opinions about credenzas (whatever those are), but let no one say that in 2010, Kanye West's proletarian dreams weren't equally peculiar and rich. In a year of economic suffering and disastrous unemployment rates, West interrupted his own wealthy anomie to pen "All of the Lights," an incongruously star-stuffed song about a disoriented parolee trying to beat a restraining order and see his daughter, working out a brief reunion with her estranged mother: "Public visitation, we met at Borders." Shortly thereafter, the bookstore declared a real-life liquidity crisis and delayed payments to vendors, who in turn stopped sending the store books; bankruptcy proceedings may even now be pending." [Village Voice]