photo: Hannah Diamond of PC Music at BRIC House in May (more by Amanda Hatfield) 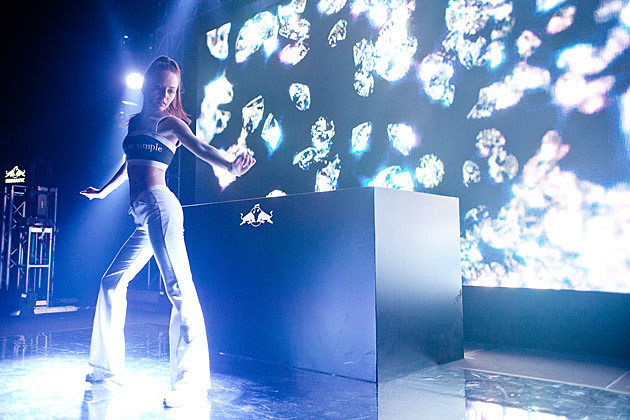 Electronic pop collective PC Music brought most of their crew to NYC in May, and members AG Cook and Danny L Harle are returning to NYC for Warm Up at MoMA PS1 on July 18. That bill also has Boys Noize, Busy P b2b Boston Bun, Lawfawndah (live) and non-PC Music fan Lotic (tickets). That night, AG and Danny will do it again at Baby's All RIght at midnight. Tickets for Baby's go on sale today (6/24) at noon.

Two days before the PC Music shows, associate SOPHIE plays his own NYC show at Output (7/16) with Star Eyes and Cry Baby (tickets).

Pretty much as soon as PC Music began catching on, there were questions as to what this whole thing was all about. Was it a high-concept art project critiquing superficial pop music, or was PC Music the very thing it seemed to be critiquing? People bought in at first (their music appeared on best-of 2014 music lists from FACT, Gorilla vs Bear, Pitchfork, Tiny Mix Tapes and more) and that praise certainly isn't gone (they made SPIN's 'Best Albums of 2015 So Far' list). But the idea that this whole thing is kinda BS is becoming increasingly prevalent.

More than even their J-pop forebearers, PC Music reminds me of a recurring and unpleasant Twitter phenomenon I've noticed over the past year, one that reached a fever pitch around the time #NotAllMen became a thing. Almost as irritating as the droves of Internet meninists, derailing discussions of misogyny and rape culture with the pointless hashtag, were the "nice guys" who'd mimic their sputtering tone with a knowing wink, as if to say: "This is how I would sound if I were one of those dickheads, which as you can clearly see, ladies, I am not!" But from the receiving end, these knowing comments function no differently than those they supposedly critique: they instill the same dread, the same urge to withdraw completely. PC Music had the potential for insurrection, subversion, or at least some shred of insightful commentary on our dumb, addictive, overwhelming digital existence. But mostly, they remind me of ideals I believed in not so long ago that now just make me feel tired.

And in her FADER piece, PC Music And The Limitations Of Parody, Aimee Cliff writes:

PC Music's appeal has always largely been that it's kind of pointless. It's described as parody so frequently because it repeats the aesthetics of mass-marketed pop music, but it also revels uncritically in those aesthetics; some of my favorite PC Music tracks trade on the same promises of infinite bliss that you hear in vapid pop songs (that's the feeling, I want it forever) while also being self-consciously trendy and of-the-moment, burning up hard, fast and bright. The tracks generate that same arms-in-the-air feeling of weightlessness that comes at 2am when you're wasted and all you can focus on is the cheesiest of hooks.

But the moment of oblivious infinity has to end. There is a world outside the club, and that's becoming increasingly important inside it. A. G. Cook has spoken of his desire to turn GFOTY and Hannah Diamond into bona fide pop stars, and to build himself a long-running super-pop-producer career akin to that of Jimmy Jam and Terry Lewis. PC Music put on sold-out shows with corporate sponsorship, and they license their music for major advertising campaigns. They serious about what they do, and they're cashing in on it. But if they're aiming for longevity, at some point they need to stand for something.

And even if PC Music's goal is in fact to be bona fide pop, do their songs truly have the power for them to be that? Can "Every Night" really do for people what Taylor Swift, Miley Cyrus and Katy Perry songs can? If it's too similar to pop to parody it and not good enough to compete with it, PC Music may just be what that FADER piece says: kind of pointless.

What do you think?