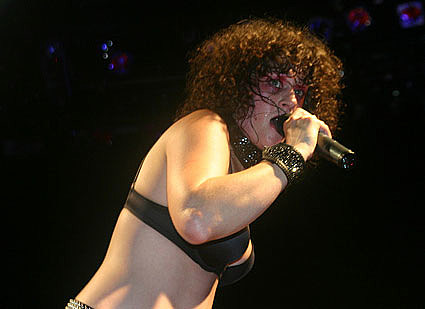 JOAN JETT IS ON PEACHES' NEW ALBUM
"it was Joan Jett who made the first move (“She’s always wearing [a] black hankie…on the left.”) to get behind Impeach My Bush. Joan Jett, for instance, called me and said, ‘What are you doing? I heard you’re in L.A. and you’re making a record. Can I come by and listen?’ So she came by, it was her 47th birthday and I’m like, ‘You like it?" [DISORDER] 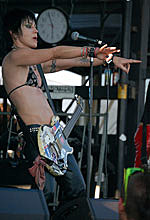 PEACHES WROTE A SONG ABOUT JOAN JETT
"'And that's the whole point, everybody does have a shot, not just girl groupies or guys,' Peaches says. "That's why I wrote the song 'Boys Wanna Be Her' — it's about a girl anti-Christ, not just the old story of the boy who comes to town and he's gonna screw all the girls and all the boys are gonna want to be him. It's very hard for a male to say 'Oh, man, I totally want to be like her.' Joan Jett is one of the only ones a guy might say that about." [Inside Bay Area]

Masuptown has a mashup of "Boys Wanna Be Her" with Gary Glitter's "I Didn't Know I Loved Ya".

Peaches has no tour dates.