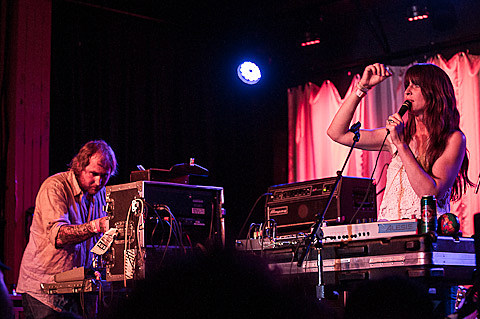 Psychedelic duo Peaking Lights are set to bring their trippy sounds to Austin Psych Fest, and after that they'll go on a short May tour which includes a Northeast run with DC duo Protect-U (who they collaborated with at Red Bull Music Academy last year) and a west coast run with Panda Bear. The stint with Protect-U hits NYC on May 8 at Glasslands. Tickets for that show are on sale now. All dates are listed below.

Protect-U (aka Aaron Leitko and Future Times co-head Mike Petillo) will release their debut full length right after that tour ends, Free USA, on May 13 via Future Times. You can pre-order it and listen to clips of each track at Rush Hour, and stream the single "Time 2 Technique" below.

Speaking of artists playing NYC around Austin Psych Fest, UK vets Loop bring their North American reunion tour to NYC's Le Poisson Rouge on 4/17 before hitting APF. Since we last spoke, Purling Hiss were added to that show, and tickets are still available.

All Peaking Lights dates are listed, with the Protect-U song stream, below...