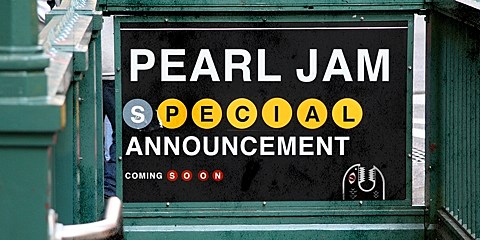 Those sneaky boys in Pearl Jam tweeted the above picture and wrote "Stay tuned." We have no idea what this means, but a little detective work shows that the picture has a striking similarity to NYC subway entrances. Will they give up the road for platform busking? Perhaps they'll be doing something bigger in NYC? Gothamist points out that there's a crowdfunding campaign to get them to play Forest Hills Stadium, but Daniel Sheffer, one of the organizers behind that campaign, thinks it's more likely they're playing the Global Citizens Festival happening September 26 in Central Park. The only confirmed performer at the moment is... Ed Sheeran.

In other news, Pearl Jam bassist Jeff Ament helped bring Browning, Montana a new skatepark. It opened this past Friday (6/26), and Jeff was in attendance. Flathead Beacon reports:

For a remote reservation town not accustomed to receiving much recognition, the Browning community hosted a monumental party at the park's official opening, with none other than Pearl Jam bassist Jeff Ament in attendance - not to play bass guitar with his legendary, Seattle-based rock band, but to skateboard with some new friends.

Thunder Park was funded in large part through a $250,000 donation from Ament, who has been doling out cash for skateparks on and near reservation land all over Montana in an effort to inject active, creative outlets for young people in depressed economies.

"This all started when I was skating in St. Ignatius and I met two kids from Browning and they were just ripping," Ament said. "I asked them if they had a skatepark, and they told me about these two ramps at the bingo hall."

Maybe this is Jeff's way of dealing with a midlife crisis?