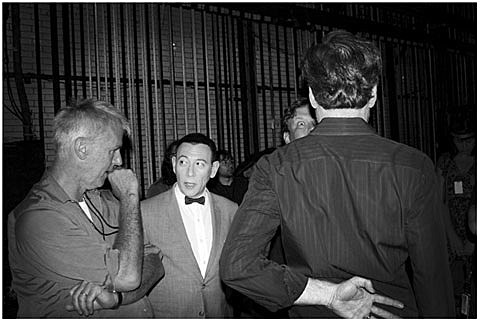 Man oh man! ANOTHER kickass show tonight!! How do we do it?! HOW. DO WE. DO. IT. I'll tell you how... By some more help from some great friends! Friends like PEE WEE HERMAN, JOHN KRASINSKI & ELI MANNING. Oh... And one other guest you might have heard of... A man by the name of...MAX WEINBERG!

It was really great seeing Max and catching up and everything. Max dropped by and was nice enough to sit in on our closing number, The Weight! Here's them going back out for the encore:

Annnnnnd.... That's all she wrote for the Legally Prohibited Tour in the Big Apple!! Thank you, New York. We had an absolutely fantastic time... And we hope that you had the same. Now, we load out, hit the showers, board the buses... And head on out to Boston! Oh, Boston. Board up the windows, lock down the kegs, and pray for daylight... BECAUSE HURRICANE COCO IS HEADED YOUR WAY! KAPOW! [Team Coco]

Conan O'Brien's second night (6/2) at Radio City featured different guests than the first. Those included Pee Wee Herman (who's coming to Broadway this fall), Eli Manning, John Krasinski and Max Weinberg, who joined the band & Conan for the closing cover of "The Weight." The tour continues on to Bonnaroo and ends June 14th in Atlanta. Videos from last night below...