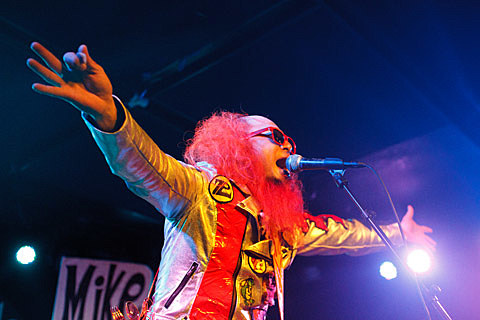 "Action Comic Punk Band" Peelander-Z can now amend that description of its sound to "Action Comic Metal Band." Referencing the glory days of hair metal's reign, the Brooklyn-by-way-of-Japan-by-way-of-planet-Peelander foursome Peelander-Z, along with the band's team of sonic engineers, absorbed hundreds of gear reviews and blogs, and started collecting era-appropriate guitar gear to construct the upcoming new Peelander-Z album Metalander-Z, a recording that is both completely of its time and completely timeless.

The album (the band's eighth studio recording) is set for release on September 10th, 2013 via Austin's Chicken Ranch Records and nothing will ever be the same. Some of the albums that inspired Metalander-Z include AC/DC's High Voltage, Cinderella's Night Songs, Def Leppard's Pyromania, Iron Maiden's Number of The Beast, Motley Crue's Too Fast For Love, Van Halen's 1984, and ZZ Top's Eliminator.

Peelander-Z have announced their first album since the unfortunate departure of Peelander Red, and as you can see above, they're going hair metal. The album's called Metalander-Z, and it will be out on September 10. You can hear it for yourself on the first single, "RIde on the Shooting Star," which opens with an intro that Bon Jovi's "Runaway" may or may not have something to do with. Download that track above, or stream it, along with the tracklist, below.

Peelander-Z also have upcoming tour dates this year, with include their appearances at Riot Fest Chicago and Riot Fest Denver. All of those dates are listed below.

Peelander-Z - "Ride on the Shooting Star"