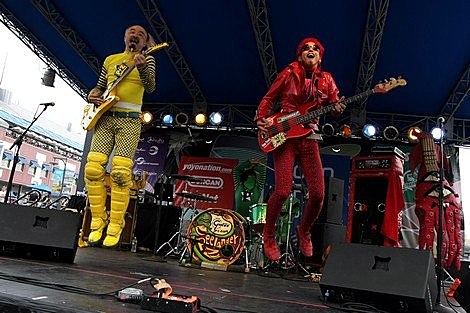 On Saturday [August 29th], we are shooting a music video for Peelander-Z and the success of the video depends upon you and everyone showing up! The audience is a BIG part of the video and if your name is Mike or John, you'll actually be heavily featured in this! And if you're not named Mike or John, just rock out and the harder you rock, the more of you there probably will be in the video! It would be super awesome if everyone came and filled the room with drunken dancing and love. [-video director, Jonathan Yi]

The video is for the song "So Many Mike" which talks about how it's strange that everyone in the world is named Mike or John. It's a performance video with the band playing on the floor and interacting with their fans surrounding them in a circle pit, so the fans (aka you) will be seen rocking out, singing along, dancing, etc. and will get lots of nice close-ups since the audience is featured just as much as the band! And those named Mike and John will make big and important
cameos! And perhaps if you rock hard enough, we'll just pretend that you're named Mike or John or just show you dancing, and we want lots of women to come rock out too! We want everyone to come and be in this thing!

We will be shooting at Death By Audio in Brooklyn but only rented the space for a few hours in the afternoon/early evening. Shooting begins promptly at 3 p.m. and we worked out a deal with them to open the bar for us with awesome drink specials so we can all get drunk and rowdy.

No matter what your name is, you should come and bring everyone you know. It's gonna be a blast!