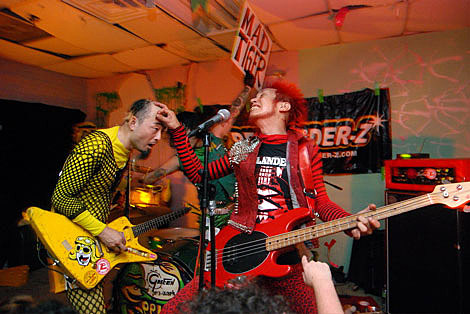 "Japanese action comic punks" Peelander-Z will be supporting the one and only Guitar Wolf at Santos THIS THURSDAY (9/23). Tickets are still on sale. The show is not one to be missed.

On November 20th the colorful group will return to the same exact NYC venue as a headliner, with support from Starscream, and Japanase girl group TsuShiMaMiRe who they'll be ending a month-long tour with. Tickets are also currently on sale for that 2nd NYC show. 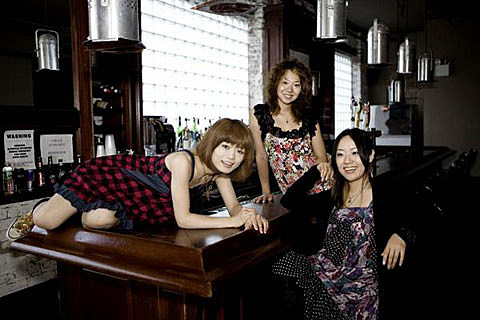 "Food is a noticeable subject in [Tsu Shi Ma Mi Re's] lyrics. In the rap-rock title song from no-miso shortcake (brain shortcake), lead singer Mari invites the listener to eat her brain. In Kamaboco (Fish Cakes), all three girls play the roles of food ingredients in Japanese hotpot, with fish cakes (Mari) feeling rejected and lonely because she is never added to hotpot. In their very first single, American Hamburger, an upbeat pop song, the singer describes herself as fat and food-loving but beautiful; the first line is, "I'm a pig so I eat pork." (Actually, all three band members are usually quite svelte.)

Some of their most powerful songs address death and its inevitability. In Na-mellow (Nameru), the singer plays the role of the young daughter of a fisherman, who gradually realizes her father will never return from a fishing voyage. In Manhole, the singer speculates about where manholes in the street might lead to, perhaps to the land of the dead.

Another common theme is sex, which is frequently juxtaposed against the squeaky-clean stereotype of the innocent-looking Japanese girl. In the title song from Pregnant Fantasy, the unborn baby of a pregnant teenager asks why her mother will bear her when she is not wanted. In World Peace & BOU, the singer appears to be speculating that world peace can be brought about by a cartoon penis." [Wikipedia]

The US tour is in celebration of Peelander-Z's new LP P-TV-Z, out on September 28th. The LP features guest appearances from members of Riverboat Gamblers, The Octopus Project, Foot Patrol, Atash, and Black Joe Lewis' Honeybears horn section. Download the band's version of "Old MacDonald", "E-I-E-I-O", above. Dig on the new video for the same song, with some recent live clips, the full album tracklist and cover art, and all tour dates below...