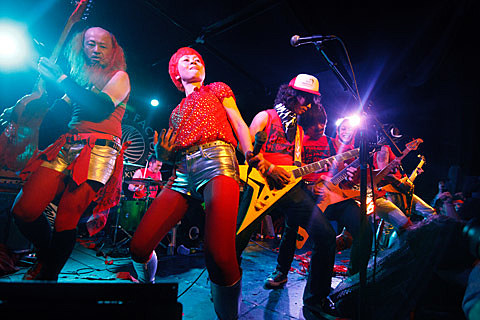 Brooklyn-via-Japan action comic punk Peelander-Z (now without Peelander Red) recently announced another tour in support of last year's hair metal-inspired Metalander-Z. That tour kicks off with Savannah Stopover and SXSW before heading to the west coast and back. Upon returning home, they'll play Glasslands on May 17 with another bunch of wacky party rockers Math the Band. Tickets for that show are on sale now.

Math the Band also put out a new album last week (2/4), which includes a Peelander-Z cover. You can stream it, along with the list of all dates and a video from Metalander-Z, below...

Peelander-Z - "Ride on the Shooting Star"

Math the Band - Stupid and Weird