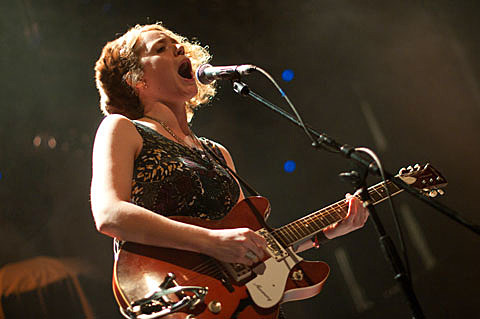 Formed in Brighton and now based in London, Peggy Sue was once linked to the U.K.'s "new folk" scene. But Young and fellow singer-guitarist Rosa Slade plugged in their instruments before making "Acrobats," the group's second album. On [Sunday at Montserrat House in DC], the minor-key tunes and close harmonies suggested Appalachia's "high lonesome" sound, while the raucous guitars were more in the spirit of such female-fronted folk-goes-punk groups as Ut and Salem 66. Unlike such precursors, Peggy Sue lacks a bassist. But Young occasionally played bass riffs on her top strings, and Olly Joyce's distinctive thumping gave an appealing swing to such songs as "Song and Dance," which featured waltzlike passages. [Washington Post]

UK trio Peggy Sue released Acrobats on 10/25 via Yep Roc and are now on a North American tour in support. That tour, headlined by AM & Shawn Lee (who just released a remix EP), kicked off last night in DC and hits Knitting Factory in Brooklyn this evening (11/7). Telextile is also on the bill and tickets still available.

All dates and a live video of one of the new Peggy Sue songs, below...