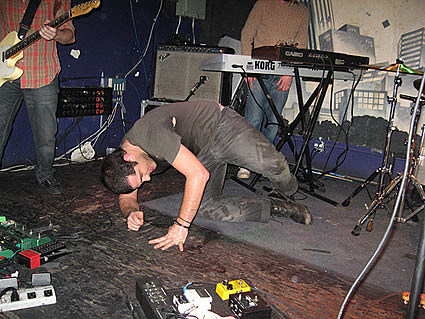 We are writing to you as our van heads back to New York. Billy has already returned to New York via plane, and is preparing for surgery.

During last night's show at Schuba's in Chicago Billy fell off the stage, landing on a broken pint glass. This happened during the triumphant finale of the set; the stage was crowded with people dancing and singing to 'Cavalry', while a strobe light turned their vision into a cut screen movie. His left hand has a gash on the palm, and a deep slice in his pinky finger which also cut tendons.

We regrettably must announce that Schuba's was the last night of the tour.

We promise to make up each and every show as soon as possible and apologize to everyone who purchased tickets. Arrangements are being made with all of the clubs on how best to handle the situation. We will have more information soon.

Webmaster note: you can send your best wishes to billy@pelamusic.com and I'll forward them to him. -Pela

Check out a video they filmed in the Chicago hospital below...